Lamb covers only the Fermi argument. The evolutionary argument is that intelligence is so unlikely to evolve that it is virtually inconceivable that it has evolved more than once in our galaxy, and possibly it has evolved only once within the observable universe. The majority of theoretical biologists accept the argument. The Doom Soon argument is that intelligence is likely to evolve at the end of the ecological viability of the system that houses it — thus, as soon as intelligence emerges on a planet, odds are it will be snuffed out.

The status of this argument is disputed. Many people take it seriously.

Lamb covers the Fermi argument well. The argument comes from the physicist Enrico Fermi and postulates that, if intelligence is rampant throughout the universe, then ETI should be here and noticeably here so noticeably here, according to recent defenders of the argument, that we would not be here, for the aliens would have done us to death — or, rather, billions of years ago they would have done to death the bacteriological slime from which we evolved. Lamb argues, correctly in my view, that the Fermi argument is more forceful than is commonly imagined. It is true, for instance, that interstellar travel, upon which the argument depends, may be more difficult than is sometimes supposed — but is it that difficult?

There are so many proposed mechanisms by means of which humans may travel to the stars that it seems inconceivable that, if ETI is common, that some have not mastered it and have started a campaign of pangalactic colonisation. Likewise, it is conceivable that certain ETI may be altruists, as UFOlogists often claim, but if ETI is common, some ETI must be like us, and, given this, they must do what we have done, and continue to do — obliterate competing species, place others in animal laboratories, and so on.

The Search for Extraterrestrial Intelligence: A Philosophical Inquiry

In this way, the Fermi argument suggests that either interstellar travel is impossible — in which event we will probably have to revise physical theory, substantially — or ETI is monstrously rare. Lamb plumbs, I think correctly, for the latter conclusion. This brings us to the minor argument. It is that life, once it emerges in a universe, must exist forever.

However, the eternal life postulate , as it is called, places severe constraints upon the nature of the universe — only a minority of all possible universes are capable of supporting eternal life.

The Search for Extra Terrestrial Intelligence: A Philosophical Inquiry

One of these constraints is that intelligent life evolves only once in any given universe the reason is technical: There would be no philosophical problem in finding life in outer space — we should expect, from evolutionary principles, it to be common — but there would be a philosophical problem in finding no extraterrestrial life — such would upset evolutionary theory.

Good as it is, it could have been much better. This site uses cookies to recognize users and allow us to analyse site usage. David Lamb evaluates claims and counter-claims, and examines recent attempts to establish contact with other intelligent life forms. He considers the benefits and drawbacks of this communication, how we should communicate and whether we actually can. He also assesses competing theorie Is the Search for Extra Terrestrial Intelligence a genuine scientific research programme? He also assesses competing theories on the origin of life on Earth, discoveries of former solar planets, proposals for space colonies and the consequent technical and ethical issues.

Paperback , pages. Published March 19th by Routledge first published February 8th To see what your friends thought of this book, please sign up. To ask other readers questions about The Search for Extraterrestrial Intelligence , please sign up.


Be the first to ask a question about The Search for Extraterrestrial Intelligence. Lists with This Book.

This book is not yet featured on Listopia. Sounds interesting and useful. Alas, this isn't that book. Most of the rest is gracelessly written boilerplate, the history of thought about ET and a review of planetary science that's been done scores of times, and almost always better. Beyond being a bull in the china shop of prose, Lamb has produced a work that reads like it was dictated into transcription software and handed to the publisher.

There are word transpositions, endless duplication, inconsistencies of form, and outright factual errors. In short, what's good about this book can be gotten elsewhere, and what's bad, beyond being terribly distracting, renders this of near-zero, if not negative, utility. 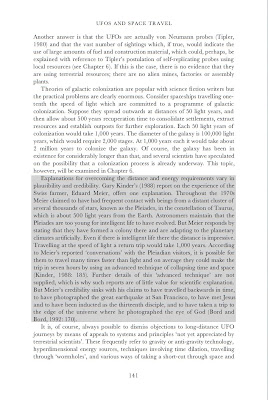