George's Church to be endless puddles. He said he'd be here when the clock struck four. And she wrapped her tattered clothes more closely around her, and looked eagerly down Lord Street and up and down Castle Street. But no Benny appeared in sight. It'll make it feel a bit warmer, I reckon," she went on, "for it's terrible cold.

But Benny won't be long now, nohow. I hope he's sold all his fusees. And she looked wistfully at the unsold matches lying in her lap. Then, after a pause, she went on again,.


I reckon the gen'lmen thinks it too much trouble to take off their gloves to get at the coppers. I wonder if they know what it is to be cold and hungry like me? And the child moved a little farther into the shadow of the church, to escape the keen cold blast that swept up from the river. Little Nelly Bates was a delicate-looking child, with a pale, thoughtful face, and big, round, dreamy-looking eyes.

She had none of that wolfish expression that so often characterizes the street Arabs of our large towns and cities; but, on the contrary, there was an air of refinement about her that was difficult to account for. Poor little waif! Her own mother she could not remember. She had only known a stepmother — a cruel, drunken woman; and, alas! Almost as soon as she could walk she had been sent into the streets with her brother Benny, who was a year older, to get her living as best she could.

Never knowing a parent's love, the affections of these two children had gone out to each other. Each to each was more than all the world beside. At the time our story opens Nelly was nine years of age, and Benny, as we said, a year older. Still the minutes dragged along, and Benny came not. The 'busses were crowded with people outside and in, wrapped in huge warm overcoats, and all down Lord Street she watched the hurrying crowds bending their steps homewards. And she tried to picture their cheerful homes, with great blazing fires, and happy children running to greet them, and wondered how none of them ever paused to notice her, shivering there in the shadow of the church.

At length the great clocks all around began to strike five, and Benny had not come; a sense of unutterable loneliness crept over the child, and she began to cry. Besides, she was hungry and cold, and there was a great fear in her heart that something had befallen her brother. 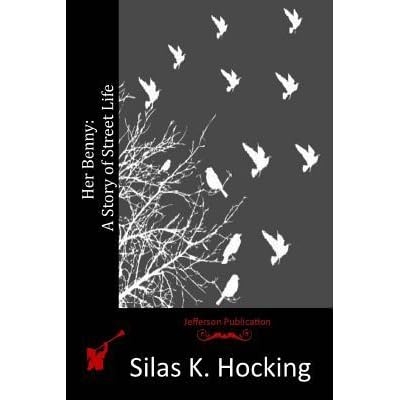 The last stroke of the Town Hall clock, however, had scarcely died away when she heard the patter of bare feet around the corner, and the next moment her brother, panting and breathless, stood before her. I's missed a hour in the time. I never did think I was sich a fool. But can't be helped now, nohow. You know what the guv'nor said when we came away this morning?

And for a moment the children looked at each other in blank dismay. Just then a gentleman was seen crossing the street carrying a portmanteau.

REVIEW: Her Benny is the Liverpool musical wearing well in its 25th year

Foller me, Nell, as quick as you can. The gentleman looked after the little fellow with an amused smile, but volunteered no further remark. Meanwhile little Nelly, who had become stiff and cramped with cold, followed at a little distance, taking care, however, that Benny did not get out of her sight. On reaching the bridge that led down to the landing-stage, Benny turned round, and, seeing his sister behind, shouted back,.

Couldn't a-been sarved quicker by a bigger chap. Benny's eyes gleamed as he caught sight of something white between the gentleman's finger and thumb. Murder and turf! The gentleman soon recovered his sudden loss of wind, though the dirty footprint on his immaculate coat was not so easily removed.

Hallo, Nell! Look here, I'se got haaf a bob, and a good warming into the bargain. Now for a roast tater, my gal, and you'll feel as right as ninepence. And, taking his sister by the hand, they hurried away at a quick trot, lessening their pace only when they were quite out of breath, and Nelly declared she was quite warm. Pennorth o' taters — hot, plaise, an' a good sprinkle o' salt," said Benny, with quite an air of importance.

In the next street they caught sight of the glowing grate of Joe Wrag, the night watchman, and of Joe himself, sitting in the doorway of his little wooden hut. Come along, I'll make room for 'e here;" and honest old Joe moved aside to make room for the little waifs who sought shelter from the biting cold. Then there was silence between them for awhile, and Joe went out and heaped more fuel on the grate, while Nelly kept her eyes steadily fixed on the fire.

What did the child see as she gazed into its glowing depths? For ever and anon a sweet smile played around the corners of her mouth, and spread over her pale thoughtful face, lighting it up with a wonderful beauty, and smoothing out the lines of care that at other times were only too visible. Meanwhile Benny was busily engaged counting his money. Fourpence he laid aside for the purpose of purchasing stock for the morrow's sale, a penny he had spent in potatoes, and still he had threepence to the good, besides the sixpence the gentleman gave him, which was clear profit.

Get ALL YOU CAN for FREE for 30 days!

The sixpence was evidently a great prize to him, for he looked at it long and earnestly. But the coppers I'll keep 'ginst bad times. Here, Nell," he said, nudging his sister, "you keep these 'ere coppers; and then if the guv'nor axes me if I has any more, I can tell him no. Don't you 'members on fine days how we looks across the river and sees the great hills 'way behind Birkenhead, such miles an' miles away? I shall be so glad. But I sees great hills in the fire, an' trees, an' pools, an' little rivers, an' oh!

Then there was silence again, and Joe — who had been to see that the lamps at each end of the torn-up street were all right — came up. On the western side of Scotland Road — that is to say, between it and the Docks — there is a regular network of streets, inhabited mostly by the lowest class of the Liverpool poor.


And those who have occasion to penetrate their dark and filthy recesses are generally thankful when they find themselves safe out again. In the winter those streets and courts are kept comparatively clean by the heavy rains; but in the summer the air fairly reeks with the stench of decayed fish, rotting vegetables, and every other conceivable kind of filth.

The children, that seem to fairly swarm in this neighbourhood, are nearly all of a pale, sallow complexion, and of stunted growth.

Shoes and stockings and underclothing are luxuries that they never know, and one good meal a day is almost more than they dare hope for. Cuffs and kicks they reckon upon every day of their lives; and in this they are rarely disappointed, and a lad who by dodging or cunning can escape this daily discipline is looked upon by the others as "'mazin' cute.

To occupy two rooms is a luxury that only comparatively few families indulge in.

Her Benny: A Story of Street Life by Silas Kitto Hocking

Why should they pay rent for two rooms when one will answer the purpose? And so year by year they bid defiance to all law and authority. The police rarely, if ever, venture into this neighbourhood alone, or if one should be foolish enough to do so, he has generally to pay dearly for his indiscretion. House agents and policemen are objects of special aversion. Of course there are trials, tribulations, misunderstandings, and lessons to be learned about goodness and Godliness Hocking was a Methodist minister along the way to redemption, love and success.

We believe in fair pay for everyone who works in the arts, and that includes all our journalists and the whole team who create The Stage each week.


As a family-run, independently-owned publication, we rely on our readers' subscriptions to pay journalists to produce the informed and in-depth articles you want to read. The Stage will always strive to report on great work across the country, champion new talent and publish impartial investigative journalism. Our independence allows us to deliver unbiased reporting that supports the performing arts industry, but we can only do this with your help. Home News. Arts Council chairman pledges more funding to emerging artists.

Richard Jordan: The Cats movie may have bombed but it was an ambitious attempt to film the musical.

Her Benny: A Tale of Victorian Liverpool by Hocking, Silas K. Paperback Book The

Hamlet, January 9. Video interviews. Hopes for a new decade: What The Stage made of the growing threat from television in How To.