Eureka has ratings and 41 reviews. Bry said: Eureka is such an awesome show - but I am not sure how well its adapts to book form. This read exactly l.
Table of contents

Lust's Latinum Lost and Found. A Choice of Futures. Live by the Code.

Buy the eBook Price: In fact, after thinking about it, I guess I was pretty close to giving this one star. But I figure if I'm going to drag this book through the mud that much I should probably present a better argument for it. So this gets an extra star for my laziness. Aug 14, MissM rated it liked it Shelves: I loved the show and am sad it was cancelled, so when I saw this on the shelf at the library, I thought, "Oh what the heck" and checked it out. The book itself was ok.

First, it was hard to figure out when and where in the show's timeline things took place. Especially with the various timelines and reboots within the show, it was kinda weird to go back to a time when Allison was still GD head, Fargo was an annoying nobody, General Mansfield forgot about him was still a problem and ye I loved the show and am sad it was cancelled, so when I saw this on the shelf at the library, I thought, "Oh what the heck" and checked it out.

Especially with the various timelines and reboots within the show, it was kinda weird to go back to a time when Allison was still GD head, Fargo was an annoying nobody, General Mansfield forgot about him was still a problem and yet after Beverley was a traitor, Zoe went off to college, etc. So that was awkward. Also, it was just Some moments felt very "on" with the characters and I could almost "hear" them saying those lines.

Other times, much less so. Over all it was a mostly cute, mindless little story, much like an over padded, slightly too much filler random episode. Nov 30, Jesse rated it liked it Shelves: I'm a pretty big fan of the series, love the characters and of course the crazy town of Eureka.

The problem with this book, is that it seems to be essentially a script for an episode put down into a book. And what I mean by that is that there is no Character development, no new twists that add something to the existing drama of Eureka, just a plan old episode that falls somewhere between season 3 and I'd say that if your a fan of the series and have 3 hours to burn then go for it May 31, Kerrikoala rated it liked it. Overall, I thought the author had a good understanding of the characters and wrote them well.

The book felt a little too long, and I didn't care for the one-sided phone conversations with ellipses instead of the other person's side. I also thought it was weird that Zoe was home visiting from college, but still occasionally talked about the high school as if she still went there.

Plus there was at least one line about her having to go to school or similar. I didn't find it nearly enjoyable as w Overall, I thought the author had a good understanding of the characters and wrote them well. I didn't find it nearly enjoyable as watching the show, but it would have served as a nice filler for when the show was done for the season. Or, I guess, to help stave off withdrawal once the final episode airs. Oct 25, Aneilea rated it really liked it. I loved the Eureka series on syfy and wished they would have made more seasons; so finding this book was a little piece of heaven.

If you enjoyed the series, you'll enjoy the book. It's a rainy day read. It wasn't as heart pounding as watching the actual show, but I couldn't put it down. It was entertaining, funny, and you get caught up in the affairs of the town as if you're an outsider looking in. The characters were the same and the plot was well carved out. Although I was wishing the ending I loved the Eureka series on syfy and wished they would have made more seasons; so finding this book was a little piece of heaven.

Although I was wishing the ending was a little less predictable and more "on the edge of my seat" the last line of the book made the read well worth it. I'm looking forward to reading the other two books in the series. May 03, Tiffany Klier rated it it was ok. This volume follows the show from season three. All the new information as of this past season changes the perspective of this fan fic in a few ways, but not significantly. The book does read like a long, detailed episode with the characters not gaining much more depth than already studied through the character profiles.

The plot is easy to follow and the adventure is interesting enough to keep a nerd like me involved. But, it wasn't one of those books you read until the wee hours. It was easy t This volume follows the show from season three. It was easy to put down and come back to later. I recommend this book and it's sequel for Eureka fans that will need a fix during the off season.

Jan 21, Sarah Crawford rated it really liked it. Eureka has a bit of a problem. Bits of it seem to be vanishing and ending up somewhere else only to replaced by objects that were at those locations. Trade a school for another school. A house for a completely different house. Now that's a problem, of course, but Eureka actually now has two problems. First, how do you stop the transfers from taking place and getting the right buildings back to the right location.

You can tell that the author was a fan of the show and he captured the essence of the characters. I think he mentioned everyone that ever visited this town.

The only problem comes with the presentation, far to much monologuing goes on with the characters discussing their motivations'! Nov 29, Will Johnson rated it did not like it Shelves: I really wanted to like this but this book was clearly made with trying to get people who've never heard of Eureka into the show even though the book takes place when the show was three seasons old.

There is a plot, yes, but the author spends half of his time reliving things that happened in the show. That isn't storytelling, that is a never-ending 'last time on Eureka' and it is maddening. 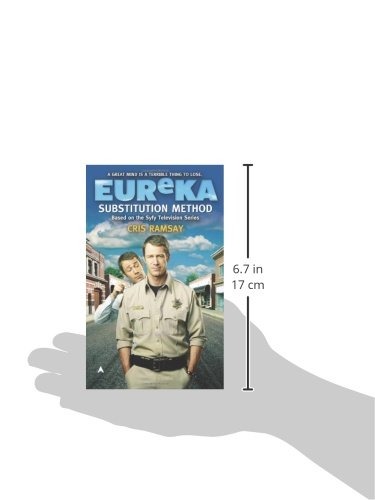 So much so that this goes in the abandoned file. Mar 22, Samantha rated it liked it Shelves: I really enjoy this TV show, because I really like scifi shows. I liked the story in the book, it sounded like a plot that could have come straight from the show. I just wish the book took place after the show was cancelled because it was a little difficult placing the time of the book in relation to the show. Overall I enjoyed this book and the characters were all as I pictured them and I love them as much in print as on the screen.

Jan 28, John rated it really liked it. I liked the book. It was just like the show only longer.

Of course, I thought that some of the incidents that they were dealing with seemed like filler. The characters seem to be portrayed pretty much like they were on the show. Everything seemed to operate like the show as well. Wasn't sure all the time frame stuff was correct but I don't have the show memorized. Basically, I liked the show and I like the book. It's a light read but fun. Give it a shot. Feb 10, Barb rated it liked it. This was pretty good though it was not what I was expecting.

I thought this was more like a book that a TV showed was based on, not a book based on a TV show. So, there was not a lot of introducing of characters as the author seemed to be writing for fans of the show. I have never seen the show so I sort of felt like I was missing something.

Still, not a bad read. It was easy on my brain at least. Sep 11, Elisa rated it liked it. Read just like an extended Eureka episode They have kept the show funny and fresh and this book didn't quite capture that. But from a science perspective, it was pretty fun, although I think that there were too many switches. May 11, Carlissa rated it really liked it Shelves: I'm a big fan of the TV show Eureka, so I was happy to find this book.

I think this story would have made a great episode on the show. Although I liked the idea of the house swapping, I do think that it was a little bit overdone and was getting tedious. I do love the way Sheriff Carter always seems to solve the problem when the scientists are stumped. Apr 13, Jen rated it liked it. The book was good but it took me 3 months to read. I kept going back and forth between other books.

The idea was fantastic but I had a hard time getting into it. I have the next book but I am not to sure when I will give it a try. May 06, Danie rated it really liked it Shelves: I thought it was pretty good. Not great, and some of the characters were slightly off like Zane and Allison didn't seem quite right, though they didn't seem horribly wrong either , but then again, The Sheriff was done really well and I could see Colin Ferguson speaking the lines from the book.

Zoe was pretty well done too. Can't wait until I get Brain Box Blues. This review has been hidden because it contains spoilers.

To view it, click here. I really like the TV show. I did enjoy reading a book that takes place in that world. I wound up skimming a bit though because a formulaic 45 minutes of TV feels way too stretched out in book form. Problem happens, gets worse, gets worse, world might end, Eureka saves the day. Oct 31, Kim rated it really liked it Shelves: People, cars and buildings in Eureka are being swapped with those from different places out in the world. Carter must stop the new people from discovering the secrets of Eureka while trying to help find the solution to the problem before the town is torn apart.

I loved this book. Jan 27, Carolyn rated it really liked it. An excellent guilty pleasure read until one of my favorite shows comes back on the air! Sep 29, Bryan Schmidt rated it it was amazing. Captures the show, quirky humor and characters, and themes perfectly. One of the best tie-on books I've read. Feb 16, Alyssa Pivirotto rated it it was amazing. Just as amazing as the show is! The author does so well at describing the characters actions even the small unconscious ones.

Jul 24, Jojo rated it liked it. It was a cute adventure. I could easily see the characters from the show in my head the whole time. Jan 12, Grant Polachek rated it really liked it Shelves: A fun little read--probably better if you know the show and its characters.

May 17, Jessica rated it it was ok Shelves: I don't really know what to think of this book. At times I liked it, other times I was bored to death. Sometimes it was interesting and often times it was long-winded.